As we get ready for some artistic work within the museum, we have just noticed the news of Bridget Riley’s latest Egypt inspired mural in St Mary’s Hospital in London.

Inspired by the colour schemes used within a number of tombs in Luxor, Egypt, Riley began to experiment with her palette to replicate the sense of richness and light found in these underground structures. Ultimately resulting in what has been named the “Luxor Palette”.

A corridor decorated by Bridget Riley in the Royal Liverpool Hospital

Bridget Riley also has links with Liverpool, as during this time Riley was commissioned to decorate two corridors within the Royal Liverpool University Hospital (the decor sadly no longer survives but is shown here)- a precursor to the news which has spurred this post! 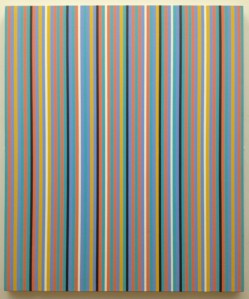 Never fear though, as you are still able to view some of her work in Liverpool through “Sea Cloud” (1981, Acc. No. 10639) at The Walker Art Gallery. The Walker collection also has has a number of other paintings inspired by the Ancient past.

Our mural isn’t being done by Bridget though, but by the very talented Monsieur Mural -with the Garstang Museum Palette!! Work will be starting soon so keep an eye on here for progress reports and of course pictures!