Egyptian ‘cosmetic’ palettes are found during the Predynastic period, they are made of flat pieces of stone – often described as ‘slate’, but in actuality siltstone – on which pigmented material could be ground up and made into cosmetics. The palette is a curious piece of material culture in Egyptian history; they are found throughout both Egypt and Nubia, and take on various distinct forms and evolutions throughout the Predynastic Period. Despite their ubiquity in the burial context, palettes quickly vanish from the archaeological record during the Pharaonic Period, disappearing not only from the material culture of Pharaonic Egyptian burials from the 1st Dynasty onwards but also from later material culture found in Nubian C-group burials.

Palettes come in a variety of forms. In the Badarian to early Naqada I Period, they were primarily simplistic rectangular pieces of siltstone, clearly a form more suited to functionality than aesthetic value. In the later Naqada I, II & III periods, however, palette forms change to become predominantly shaped into forms reminiscent of animals. Of these zoomorphic palettes, the most common representations include fish, birds and turtles, though there are also more unusual examples such as hippopotami and gazelles. 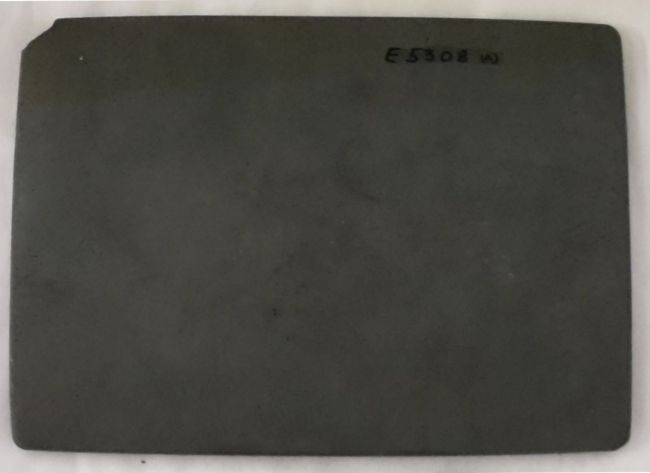 The Nubian A-Group also had their own distinctive cosmetic palettes, though there is evidence of importation of Egyptian palettes as well. These palettes were usually made from quartz, rather than siltstone, with most Egyptian siltstone palettes being found in the northern regions, closer to the First Cataract. Nubian palettes have similar feature to their Egyptian neighbours, though often of simpler geometric shapes rather than zoomorphic forms; there is evidence of use from observable malachite residue on many palettes, and they were usually deposited in burial contexts.

The Importance of Iconography

Animal iconography is used across all mediums of Predynastic art, including ceramic vessels, taking the recognisable forms of turtles, birds, fish, hippopotami and other animals found represented in cosmetic palettes. Perhaps the most obvious form of animal representation in Predynastic vessels are theriomorphic stone and ceramic vessels, such as those found in Cemetery T at Naqada and in the Main Deposit at Hierakonpolis. Similar zoomorphic material is found on a range of objects of beautification and personal adornment, including ivory bangles and combs with carved tops in the form of bull horns or birds, as well as on prehistoric graffiti across the breadth of Egypt.

The use of animal iconography across Predynastic material culture illustrates the importance of these animals to the Egyptian people at this time. These recurring motifs indicate that the fauna of the Nile Valley was of great importance to Predynastic Egyptians, and while any symbolic or religious associations can only be conjectured about, the actual animals themselves played a key part in the visual landscape that prehistoric Egyptians inhabited. As well as illustrating the Preydnastic fascination with the native fauna, palettes also indicate the importance of cosmetics and beautification in Predynastic society, as well as providing evidence for trade between regions in Upper Egypt and A-Group sites in the Sudan.

There have been developments in the research into E.6953, regarding its context and Ancient Egyptian attitudes to horses. 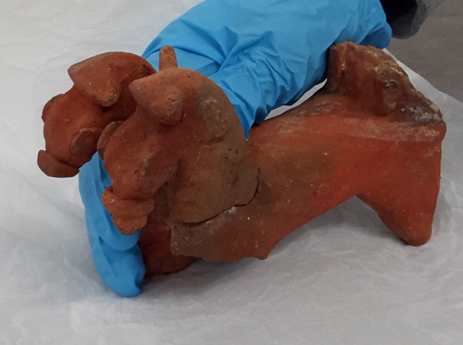 The object is likely to have been made of Nile silt, due to the characteristic red colouring of the clay, suggesting that the object was made in Egypt, not in the Ancient Near East, where other such models come from. The two horses share a body and four legs but have their own heads, a style that may have been utilised to make the model robust and easier to make. They have reins and blinkers, which may indicate that the break at the rear of the object was a chariot. The fact that this figurine depicts a chariot is unusual, as this is the only example that has been found in the course of this research and other examples depict only one horse.

The object cannot be dated before the New Kingdom, as this is when horses were introduced to Ancient Egypt, as the first archaeological evidence of horses is at the Hyksos site of Tell El-Dab’a, where a significantly large number of horse molars have been found. This indicates that the species may have been introduced during the settlement of the Hyksos during the Second Intermediate Period.  Horses are depicted in writing for the first time in the Stela of Kamose, before becoming a routine feature in Ancient Egyptian art and becoming a standard hieroglyphic sign.  The hieroglyphic sign for the collective is ‘sesmet’, which is derived from the Arabic ‘susim’ and indicates the influence that Ancient Near Eastern culture had on the Ancient Egyptians.

In Ancient Egypt, horses were never used for labour, but were a symbol of royal power and heroic actions in scenes of chaos. In the Kadesh Inscription of Rameses II, his two horses are named ‘Victory in Thebes’ and ‘Mut is content’. The fact that these animals were given theophoric names by the king indicates the prestige that they held with royalty. It also shows how even though horses were not a part of religion, they could be used to indicate how the gods were always beside the king. The fact that Rameses II also tells his officers that his horses would be eating with him, because they behaved more nobly than they did, indicates the level of care that was given to these creatures. Although this is hyperbole, it does indicate the high regard that horses were given in Ancient Egypt.

Similarly, the Sphinx Stela of Amenhotep II also describes an episode where he is shooting at a target from his chariot and describes how he trained his horses into fine beasts. This indicates that these were a highly revered animal and were an important part of royal iconography, especially as horses were expensive to obtain and maintain. It also indicates how they were an important part of Ancient Egyptian warfare, being used to pull chariot in battle, from which the rider would then fight.

The fact that the king was so appreciative of these animals in Ancient Egypt can be seen in the Stela of King Piye from the Nubian Twenty-fifth Dynasty. After finally ending his assault on King Namart, ‘His Majesty proceeded to the stable of the horses and the quarters of the foals. When he saw they had been [left] to hunger, he said “I swear, as [Ra] loves me, as my nose is refreshed by life; that my horses were made to hunger pains me more than any other crime you committed in your recklessness!”’ This passionate speech shows the real concern of the king at the poor state in which he has found the horses and that he finds it the most despicable crime of Namart, indicating the passion the Ancient Egyptians for horses.

Near the palace site of Malkata at Kom el-Abd, a track of 4km width and 120km in length has been discovered. It has been suggested that this is a racecourse for chariot racing, however it is difficult to date this structure and with a lack of comparisons from within Egypt, it would be hard to ascribe this function to the site confidently. The tomb of Userhet (TT56) shows the owner hunting using chariots pulled by horses. The reins are wrapped around his lower waist in order to free his hands for hunting. This is important, as it shows that horses were often pulling chariots in Egyptian art, which would indicate why E.6953 is of two horses.

Finally, horses were not just valiant, brave and noble creatures to be used in hunting and warfare, but they also had rather a romantic image. This can be seen in poems written on P. Chester Beatty I, Verso, where the poet writes:

As the king’s own steed is welcome,

A champion chosen from thousands,

Thoroughbred, best in the stables.’